Sorry! There are currently no tickets available for Slayer.

American thrash metal band Slayer will embark on the last leg of what’s being called its final tour in November. The group, which first toured in the 1980s, will play 18 shows in the U.S. beginning November 2 in Asheville, North Carolina, and wrapping up November 30 at The Forum in Inglewood, California. The Forum show will be the second of two, the first set for November 29. The Forum is the only venue Slayer will play twice, and both shows are nearly sold out.

Slayer will be joined for some shows on “The Final Campaign” by Primus, Ministry and Philip H. Anselmo.

Where To Buy Slayer Tickets

Of the higher-interest shows, most are 90% sold out or more on the primary market, including the final show, for which there are less than 15 tickets left on Ticketmaster. Fans who want more choice of where to sit for any Slayer show should shop around, as secondary ticket marketplace TicketIQ has seats for all Slayer shows.

TicketIQ offers fans tickets to all shows and a Low Price Guarantee for all Slayer tickets for all tour dates, and all concert tickets this year. That means that if you find a secondary market ticket for less on a site like Stubhub or Seatgeek, we’ll give you 200% of the difference in ticket credit. TicketIQ customers save an average of 5%-20% over Stubhub or Seatgeek.

How Much Are Slayer Tickets 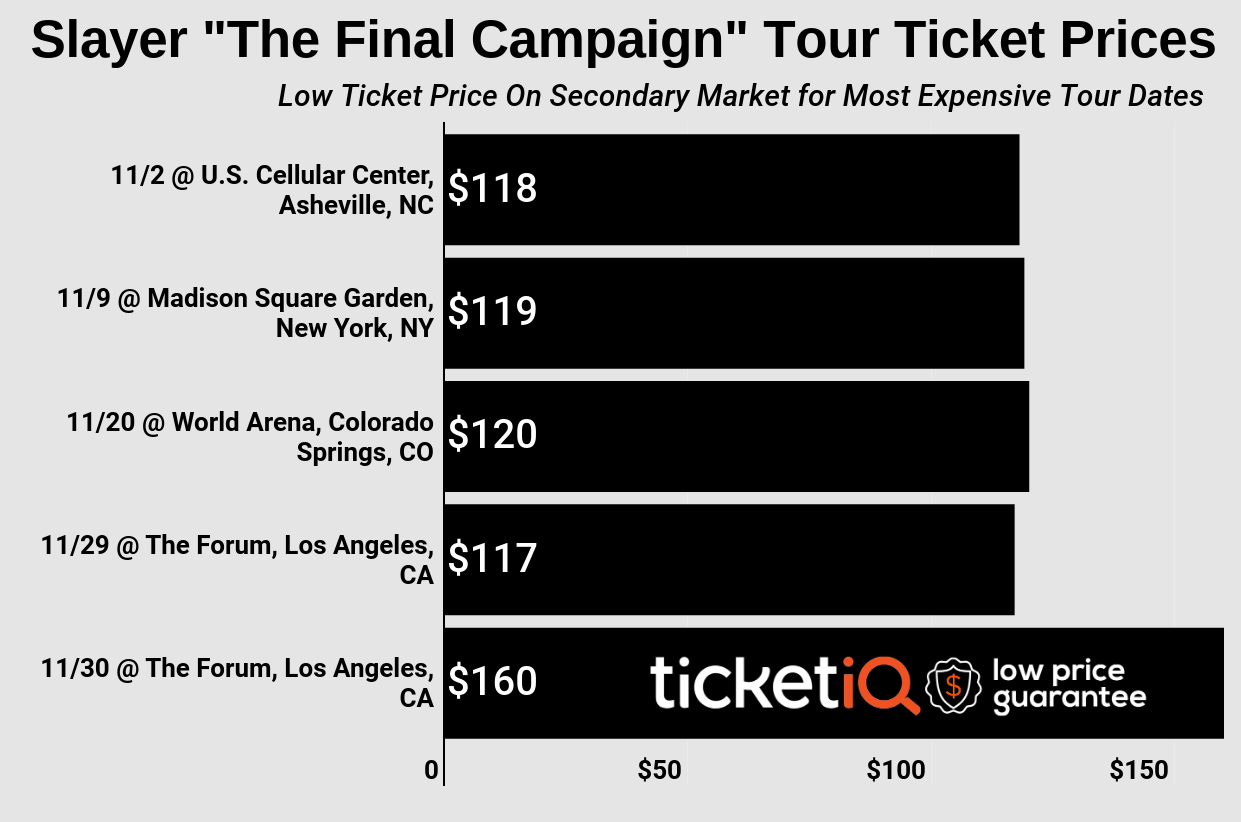 Both Los Angeles shows are already nearly sold out on the primary market. On November 29, Ticketmaster shows about 90% sold out, with the cheapest seat at $59.50 for Section 233. Most of the available seats are in the 100 Sections on the sides, back from the stage and start at $149.50. TicketIQ has seats available throughout the venue, including similar seats in Section 105 for $177. But what you’ll find on the secondary market is that General Admission tickets are still available, starting at $362.

The November 30 show looks to be the toughest ticket on the tour, with less than 15 seats remaining on Ticketmaster. Most of those tickets are “Official Platinum,” which means they are dynamically priced. Seats in Section H are currently listed on Ticketmaster for $455. Fans should definitely shop around, as TicketIQ has seats throughout the venue, including tickets in the 200 Sections for $171, and seats in Section H starting at $441, a bit less than on the primary market.