Sorry! There are currently no tickets available for Shawn Mendes.

According to figures reported to Billboard Boxscore, Shawn Mendes: The Tour grossed $12.7 million and sold 188,980 in the tour’s first 16 European dates. The tour, which is the singer's third, is now set to embark on the  49-city North American leg, which includes a first stadium show in the 20-year-old's hometown of Toronto.  Alessia Cara is the opening act for Europe and selected dates in North America. Multiple cities will have two shows including Rogers Place in Edmonton, Allstate Arena in Illinois, Staples Center in Los Angeles, Oracle Arena in Oakland, Prudential Center in Newark, TD Garden in Boston, Bell Center in Montreal, Barclays Center in Brooklyn, Mohegan Sun Arena in Connecticut.

Where To Buy Shawn Mendes Tickets

For most shows, lower level tickets are sold out through Ticketmaster.com or AXS.com, the two ticketing platforms used by venues on the tour. There are some upper level tickets at the very back of the upper level for most stadiums. For anything other than those cheapest seats, shopping the secondary market is the best option. Sold out tickets on the Secondary market range from $75 to $150, with a few stops only two stops below $50, with tickets at Wells Fargo in Des Moines and Kansas City very affordable and below face price.

TicketIQ has Low Price Guarantees on Shawn Mendes tickets for every stop on Shawn Mendes: The Tour, in addition to Low Price Guarantees on all concert tickets, which means that if you find a secondary market ticket for less on a site like Stubhub or Seatgeek, we'll give you 200% of the difference in ticket credit. TicketIQ customers save an average of 5%-20% compared to Stubhub and Seatgeek.

How Much Are Shawn Mendes Tickets

Below are the cheapest ticket in many of the stops, which kick off on June 12th On the secondary ticket markets, the cheapest tickets range from $35 to over $100 in upper level. For most cities, 100-level tickets are going for twice as much as the 'get-in' prices with floor seats going for three times as much. For the tour finale in his hometown Toronto at the Rogers Center, prices star around $100 and the the price for a ticket in section A6, which surrounds a short walk-out stage, is going for $692 while other sections at the front of the floor are under $300. 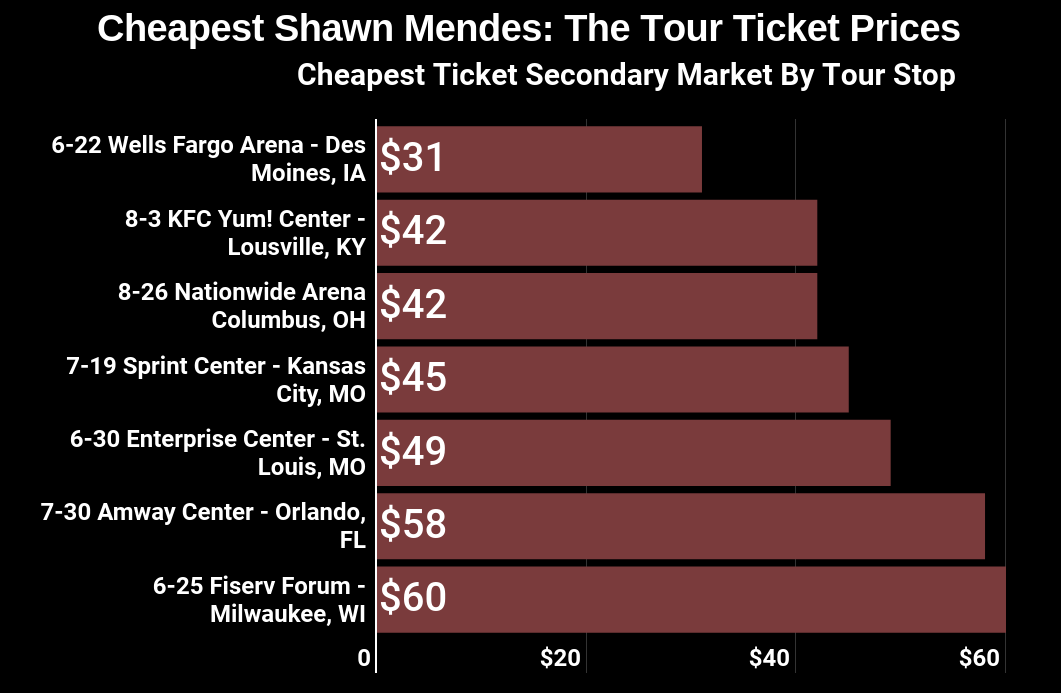