How To Find Cheap Tickets For Paul McCartney's Freshen Up Tour 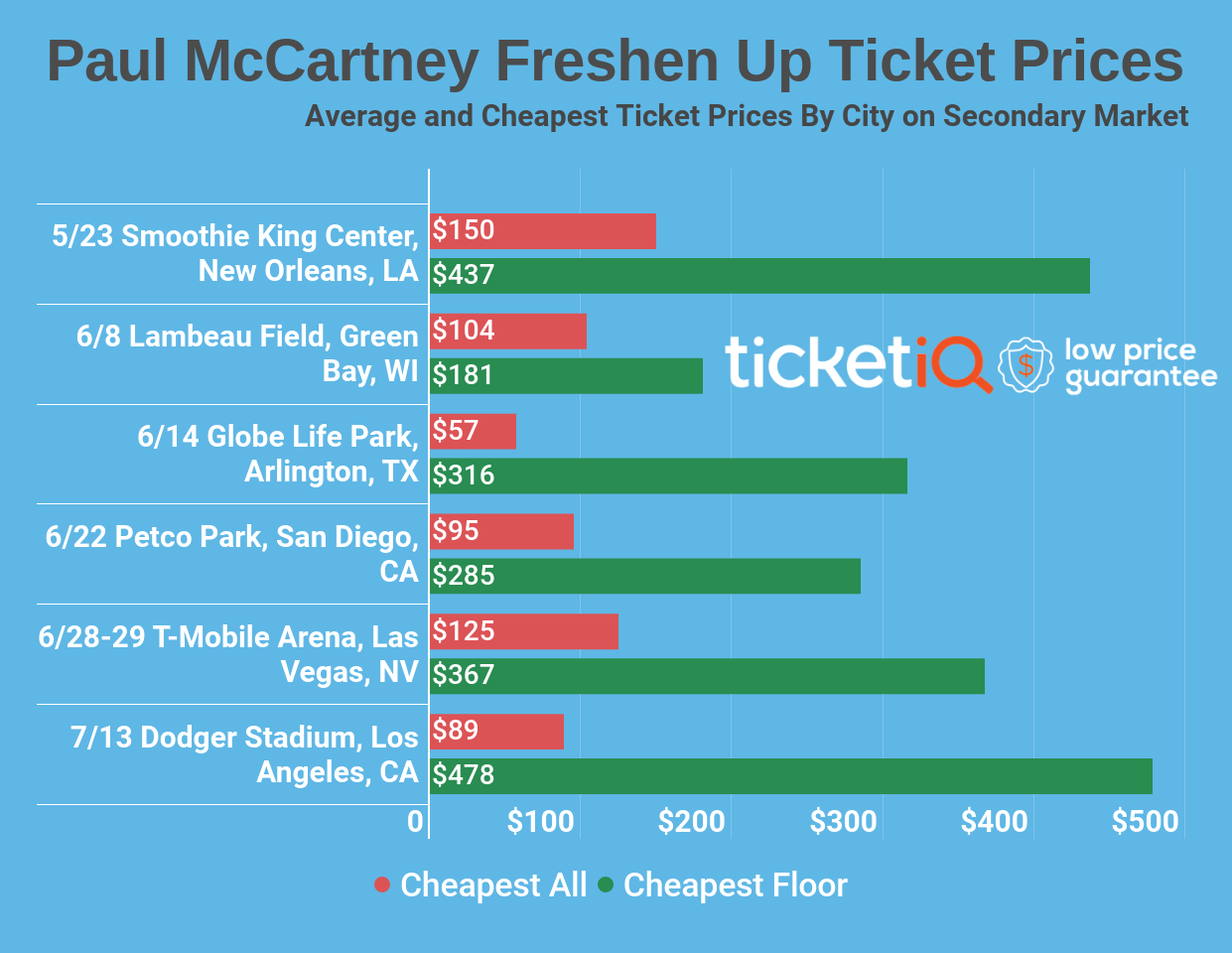 Paul McCartney has kick off the Freshen Up tour at Smoothie King Center in New Orleans and less than 2 months later, it will wrap up at Dodger Stadium on July 13th. The tour is McCartney's first tour after the release of his album, Egypt Station. Prior to the announcement of the tour, McCartney revealed he would headline the 17th Austin City Limits Music Festival, where the cheapest ticket available for $285 for a three day pass.

For fans that are looking to catch Sir Paul as the only act, there are some very interesting options this summer, including Lambeau Field, home of the Packers, Petco Park, home of San Diego Padres and Globe Life Park, home of the Texas Rangers.  For McCartney, there are also many arena shows, including two nights in Las Vegas at T Mobile Arena. Ticket prices start at $125 across the two Vegas shows, with floor seats starting at over $350. TicketIQ has tickets to all  stops on Paul McCartney's Freshen Up 2019 Tour.

Tickets through Ticketmaster are essentially sold out (other than VIP options, which includes "Package to include one premium Price Level ticket,  a commemorative ticket, merchandise item designed and created exclusively for package purchasers, and collectible laminate to remember your evening") which means that the secondary market is going to be the best bet for seeing one of the 16 US and Canadien shows.

On the secondary ticket market, the cheapest prices range from $100 to $150, with the exception of the larger baseball and football venues, where tickets start under $100. Globe Life Park in Texas is the cheapest show with tickets under $50. Floor seats are above $500 in most markets. TicketIQ provides access to Low Price Guarantees on all Concert tickets. If you find the same ticket for less, we'll give you 200% of the difference in ticket credit.

For an overview of all Summer Concerts and the best way to find cheap tickets, visit the TicketIQ Blog Summer concert buying guide.

Use Code BLOG25 for $25 off any purchase

The below review in the Charlotte News and Observer is a good summary of the show for fans deciding whether to shell out the money required.

"I didn’t know seeing Paul McCartney in concert was on my bucket list — one of the bands or singers I have to see live in my lifetime. But after watching him perform 38 of his songs Monday night at Raleigh’s PNC Arena, why wasn’t a McCartney show on my list? For two hours and 45 minutes, with a quick break at the end before the encore, McCartney’s Freshen Up tour delivered hit after hit — from The Beatles, Wings, as a solo artist, and a song from The Quarrymen, the group that preceded The Beatles. He weaved in stories behind the songs, dedicating them to those who inspired them or wrote them. That included a shoutout to wife Nancy Shevell, who he said was in the audience."

Legendary Beatles member and solo artist Paul McCartney will embark on a 14-city North American extension of the “One on One” tour beginning this July and wrapping up in October.