Sorry! There are currently no tickets available for John Mayer.

Where To Buyt John Mayer Tickets

Rocker John Mayer began touring in 2001, and this year is on his seventh tour, which began July 19 at Albany, New York and wraps up September 17 in Sacramento, California. Fans will get two chances to see Mayer in select major cities – in New York, July 25-26; Toronto July 28-30; Chicago, August 14-15; and Los Angeles, September 13-14.

Higher-interest shows are nearly 100% sold out on the primary market, often with only single seats available, though most still have “LaneOne Premium” packages available. These packages include seats in the first 10 rows, early entrance to the venue, ambassador support and $25 in either parking or $50 in Uber credit.

On the secondary market TicketIQ has a Low Price Guarantee on John Mayer tickets for every stop on his 2019 summer tour, in addition to Low Price Guarantees on all concert tickets, which means that if you find a secondary market ticket for less on a site like Stubhub or Seatgeek, we’ll give you 200% of the difference in ticket credit. TicketIQ customers save an average of 5%-20% compared to Stubhub and Seatgeek.

The July 26 show at Madison Square Garden is 95% sold out onthe primary market, with tickets available in MC66 and similar sections, starting at $99.50 There appear to be 50 or fewer seats available. Fans should shop around because on TicketIQ, seats are available throughout the venue, including in Section C, right in front for the stage, starting at $949. Tickets high up in the Chase Bridge North Section start at $165. 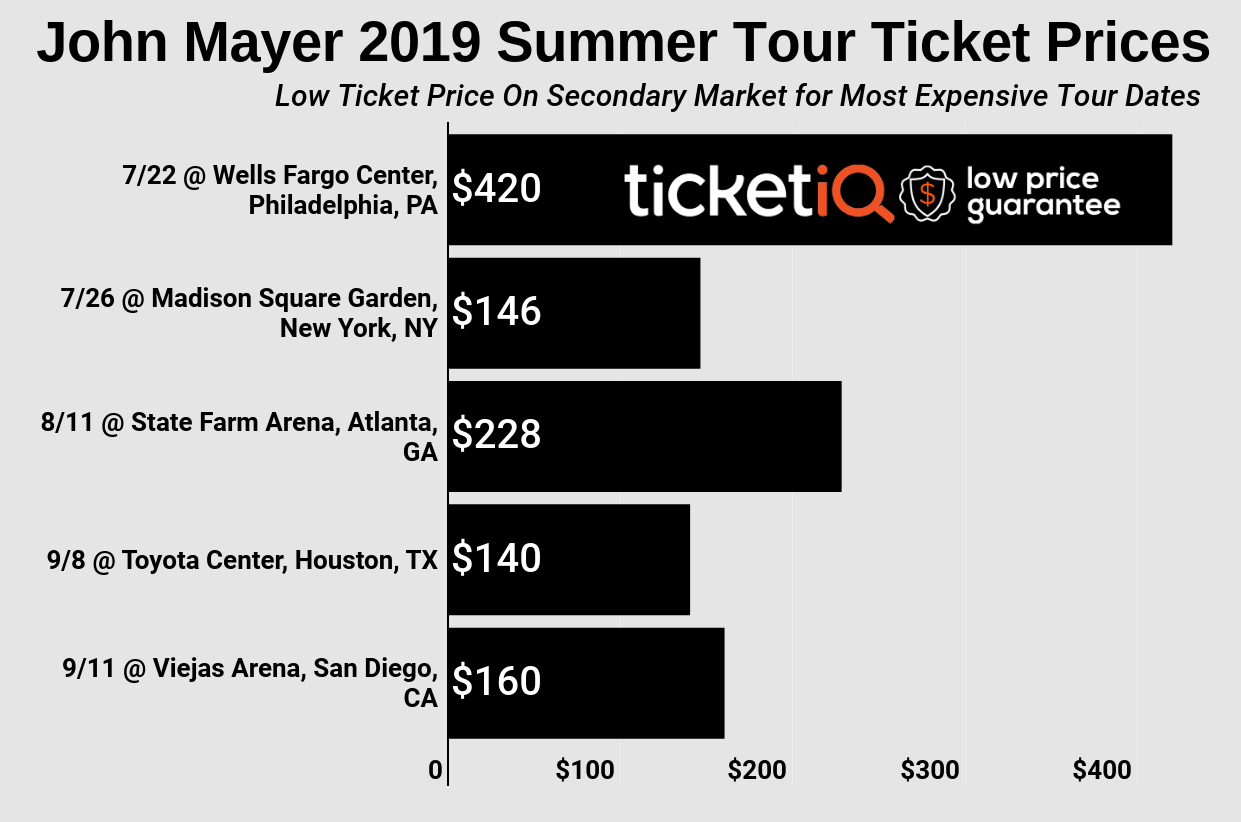 On Ticketmaster, the September 11 show in San Diego, is about 90% sold out, and the cheapest seat available will cost fans $79.50 for stadium seating high above the stage. The only available seats in the lower bowl start at $150 for obstructed view to the right of the stage.  TicketIQ has stadium seats available starting at $179, and for those who want to treat themselves, floor tickets directly in front of the stage in Section AAA for $1,150.