Sorry! There are currently no tickets available for Iron Maiden.

Where To Buy Iron Maiden Tickets

British heavy metal band Iron Maiden, which got its start in 1975 and began touring in 1980, continues its “Legacy of the Beast Tour” with a North American leg starting July 18 in Sunrise, Florida. The tour will make stops in the U.S., Canada and Mexico before wrapping up on September 30 with three dates in Mexico City. Iron Maiden will also play multiple dates in Brooklyn (July 26-27) and Toronto (August 9-10).

Many of the higher interest shows are nearly sold out, and the August 17 show in Pittsburgh is sold out on the primary market.

For the tour, primary market tickets are available through Ticketmaster. On the secondary market TicketIQ has a Low Price Guarantee on Iron Maiden tickets for every stop on "Legacy of the Beast Tour”, in addition to Low Price Guarantees on all concert tickets, which means that if you find a secondary market ticket for less on a site like Stubhub or Seatgeek, we’ll give you 200% of the difference in ticket credit. TicketIQ customers save an average of 5%-20% compared to Stubhub and Seatgeek. 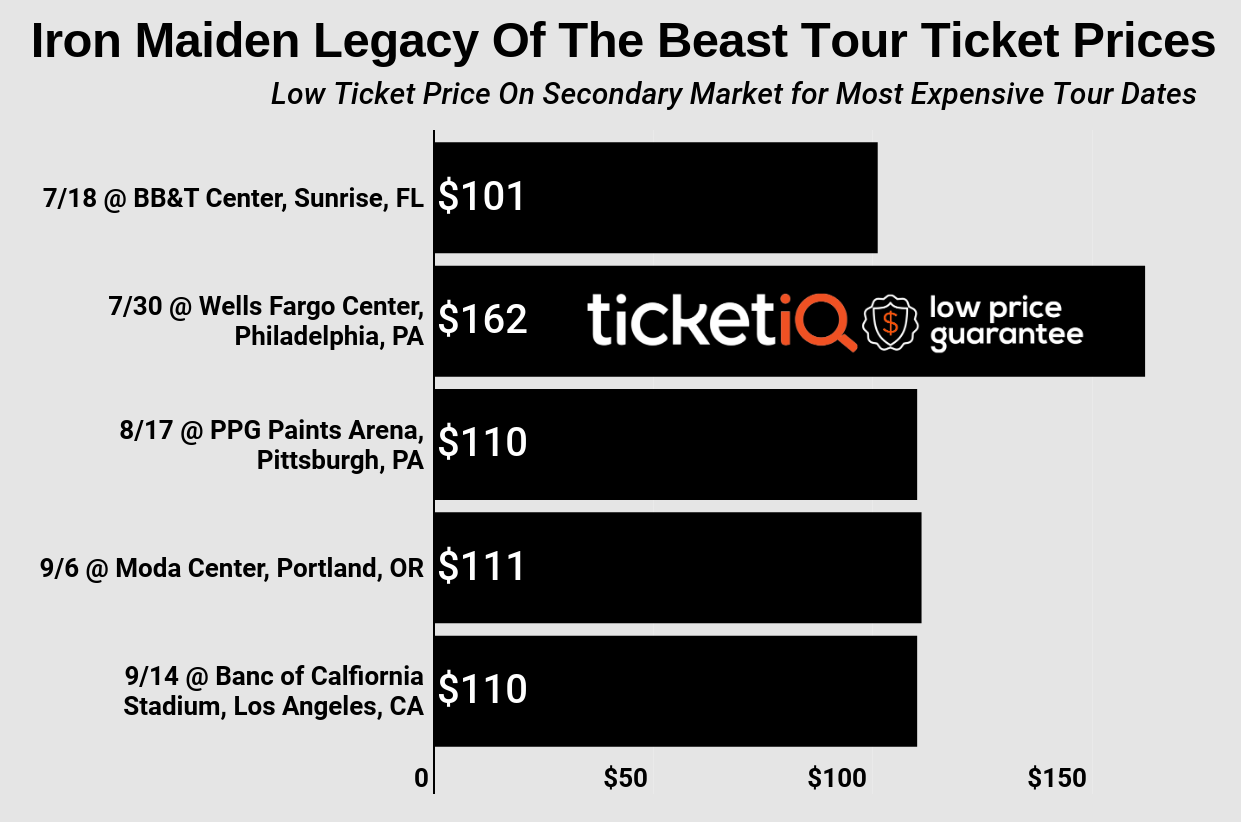 TicketIQ has tickets in spots throughout the venue for the sold out August 17 show, including seats in the 200 levels starting at $136 or for those who really want to treat themselves, Club Level seats starting at $313.

Another example of why fans should comparison shop is the September 6 show in Portland. Ticketmaster has less than 30 seats available and all are in the 300 sections starting at $86.50. Those same seats start at $145 on the secondary market, but TicketIQ shows a bigger selection including100-level seats starting at $286.

Iron Maiden fans in Winnipeg will get the best deal of the summer — the cheapest ticket on the secondary market to see the band on August 28 is $23 for a seat high above the stage in the 300 sections on the secondary market. On the primary market, those same tickets start at $62. TicketIQ also has seats in Level 118 starting at $231

Iron Maiden has released 16 albums and this tour features music from the 2015 release “The Book of Souls” and the tour is named after the video game released in 2016, called “Iron Maiden: Legacy of the Beast."