How to Find Cheapest Tickets for Hometown Rising Festival + 2020 LineUp

Hometown Rising, one of the most sought-after country music and bourbon festivals is heading to Louisville, Kentucky on September 12th and 13th this year. The second-annual Hometown Festival gathering includes live music performances combined with bourbon tastings and experiences worth a lifetime. It has been reported that Carrie Underwood and Blake Shelton will headline this year’s Hometown Rising.

How To Find The Cheapest Country Music Tickets In 2019

While Classic Rock may be the most expensive set of shows this summer, Country is the most plentiful, with legends and newcomers alike touring across the country to sing about love, loss, livin’ and even beer. With a few exceptions, cheap tickets are available to most of the show on both the primary and secondary market, whether on the lawn or in the pit, the Amphitheater shows have unsold tickets at face price in both of those areas.  Below is the list of some general ticket buying tips, as well as specific guidance on where to get the best tickets for each tour, whether on TicketIQ for 'sold out' secondary or Ticketmaster and Livenation for face price tickets.

Now in full Swing, the Cry Pretty Tour 360 began on May 1, 2019, in Greensboro, North Carolina and is scheduled to conclude on October 31, 2019, in Detroit, Michigan, playing a total of 60 shows.  It's the follow up to Underwood's 2016 Storyteller Tour, which grossed over $56 million. The tour is playing in arenas across the country, with seating capacity around 13,000-15,000 people per show.

Tickets are not completely sold out via Ticketmaster, however, primary market options are limited for many shows. On TicketIQ, tickets for most shows sta 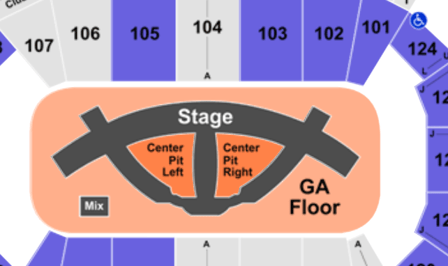 rt between $50-$70, with a handful of shows with tickets under $50. The cheapest faceprice on Tickmaster and AXS the ticketing platform used by most venues is $49.50 for upper level seats and $69.50 for lower level seats. For some shows, tickets are selling for below face price on the secondary market, so it's important to show around.

Click here to shop for tickets to Carrie Underwood Cry Pretty 360 Tour or visit any of the individual shows below.

TicketIQ is a ticket market place with access to Low Price Guarantees on all Concert tickets. If you find the same ticket for less, we'll give you 200% of the difference in ticket credit.

Taste of Country says the below of the Cry Pretty 360 tour: "Visually stunning, sonically transfixing, two-hour-long show seems destined to include her entire catalog. "Drinking Alone" was the show's sexiest moment...out came Underwood in a black fedora to perform on a velvet sofa as her bass player stood in the smoke holding an upright. Translucent screens capable of enclosing her 360-degree stage serve as projection monitors, replacing the jumbotrons one expects. For this song, they helped build a smokey 1920's nightclub tableau. They were used most effectively at the beginning of her show.

(UPDATE 1/29/16) The stage is set for country megastar Carrie Underwood's "Storyteller" Tour, which kicks off this Saturday at Jacksonville Veterans Memorial Arena in Florida. 45 dates are scheduled through the end of May, including a brief run on the Country 2 Country Festival in Scotland, England and Ireland in March. With the debut of her 360-degree stage, the "Blown Away" singer is setting the bar high, and Carrie Underwood tickets are finding big demand on the secondary market.